I think it’s safe to say the mobile app developer I used to work for didn’t hire me because of my experience as a poet, but because of my knowledge of social media and my prior experience with converting technical jargon into something the general public could understand. My official title was Senior Copy Editor and I spent most of my days reviewing text and providing suggestions for error messages, tutorials, infographics, and occasionally for an app mascot. 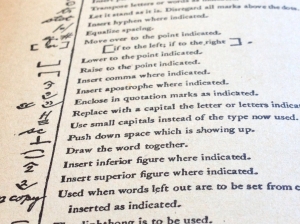 What surprised me most about that job was how I came to realize my fifteen years of working at the craft of poetry seemed as important as my resume’s twenty years of experience in editing and proofreading.

As a social marketer for my own websites and blogs, I had grown used to the 140-character limit on Twitter and the need to be as succinct as possible when getting a message out in that medium. However, when it came to writing the instructive welcome text for the penguin mascot on an iPhone app, I quickly realized that 140 characters was a luxury. My modus operandi for drafting text for the penguin–or even for tutorial tips–became very similar to the method I use for crafting a line of poetry.

I would begin by writing down a variety of ways of saying the same thing–each time tightening the text to cut a word here, two words there. I would find one word that could substitute for three. I switched sentence parts around. Each version was saved as an option, with my ultimate goal being the most concise and precise phrasing possible. While brevity was one of the objectives, I had to include all of the message points desired by the project managers while also ensuring that the average user would understand them all.

When I had a suitable selection for the project managers to choose from–typically ten to twelve options–I ordered the choices by character count, from the longest to the shortest. They were then free to debate among themselves which best conveyed the necessary instructions or information while fitting in the space allotted for the text.

In a process that was actually very similar to that of a writing workshop, the project managers would reply to me with a phrasing that was their favorite, but sometimes pointing out a word that didn’t quite work for them, or a missing bit of information that they thought would be important for the app user. Often, a word they used in their notes to me would spark in my mind an association with another word or phrase and–bingo!–the text would quickly coalesce.

When he wrote about poetry being “the best words in their best order,” I’m sure Samuel Taylor Coleridge never imagined his definition being applied to the editing of error messages for smartphone applications. It does make me wonder what he would think about the broader application of his description to also describe what a copy editor does.

Swipe my free PDF and turn website visitors into customers!

Want your business to be memorable?